Heat waves, torrential rains and other extreme weather events are occurring more frequently due to climate change. We can directly feel the threats to our safety and security.

Electricity generation from coal-fired power plants results in more CO2 emissions than from any other fossil fuel, and coal power is a major driver of climate change. That is why many countries are moving to phase out coal, but Japan is going in the opposite direction with many coal-fired power projects under way.

The Yokosuka coal-fired power plant on Tokyo Bay is one of them.

If the proposed two new units are built and start operating, they will emit a huge amount of CO2 and other air pollutants for more than 30 years. Despite this, the Minister of Economy, Trade and Industry accepted simplified procedures for the project’s environmental impact assessment, and recently admitted that the EIA procedure was completed. We assert that it was improper to accept the simplified procedures.

But the era of coal power must come to an end. We hold the government responsible for wrongfully approving this project. We believe we have every right to want to conserve and leave behind a healthy living environment for our children and grandchildren.

In this lawsuit we are calling upon the Minister of Economy, Trade and Industry to cancel the notice of finalization of the environmental impact assessment (EIA) for the construction of two new coal-fired generating units at the Yokosuka power plant.

WHY DOES THIS REQUIRE A LAWSUIT?

The government should not have approved the construction, for the reasons we outline below. Through this lawsuit we are questioning the legality of procedures taken by the government.

◆The construction of new coal-fired power plants is inconsistent with Paris Climate Agreement.

Every country must phase out coal power by 2030 to achieve the target stipulated in the Paris Agreement, the new global agreement on climate change to keep the global temperature rise well below 2 degrees Celsius. To be consistent with that agreement, no new coal-fired power plants should be built.

The site of Yokosuka thermal power plant project previously had a total of eight oil- or gas-fired units (originally coal-fired but later converted). Except for a few, almost all had been decommissioned or were in a long term planned shutdown since 2004. Some were restarted after the Fukushima nuclear accident, but none have operated since 2014.
Then, to construct two new coal-fired generating units on the site, plant owner JERA exploited a “replacement/upgrade” assessment process introduced by the government after the Fukushima disaster. By doing so, JERA took advantage of simplified EIA procedures that were intended for projects that would construct new a power plant on an existing site and reduce emissions of CO2 and air pollutants. This tactic cut a year off the regular EIA process.
However, all generating units at the Yokosuka site had stopped operating years earlier, as mentioned, so their CO2 and air pollutant emissions were already zero. It is wrong to say, therefore, that any new plant will reduce emissions.
This is the basis for our assertion that the “replacement/upgrade” assessment process should not have been used for the Yokosuka project. It was an improper decision to accept simplified EIA procedures.

We assert that errors were made in the environmental impact assessment, relating to the coverage and evaluation of measures for CO2 emission mitigation for generating units to be newly constructed. For example, the assessment assumed that the units would be powered by coal, other fuels with lower CO2 and air pollutant emissions were not considered, and air pollution and hot water discharge from the proposed plant were not given adequate consideration.

Many elementary and junior high schools, medical and leisure facilities are located within five kilometers of the project site. Despite many concerns, the EIA procedure was completed, and preparation work for construction started in May 2019. 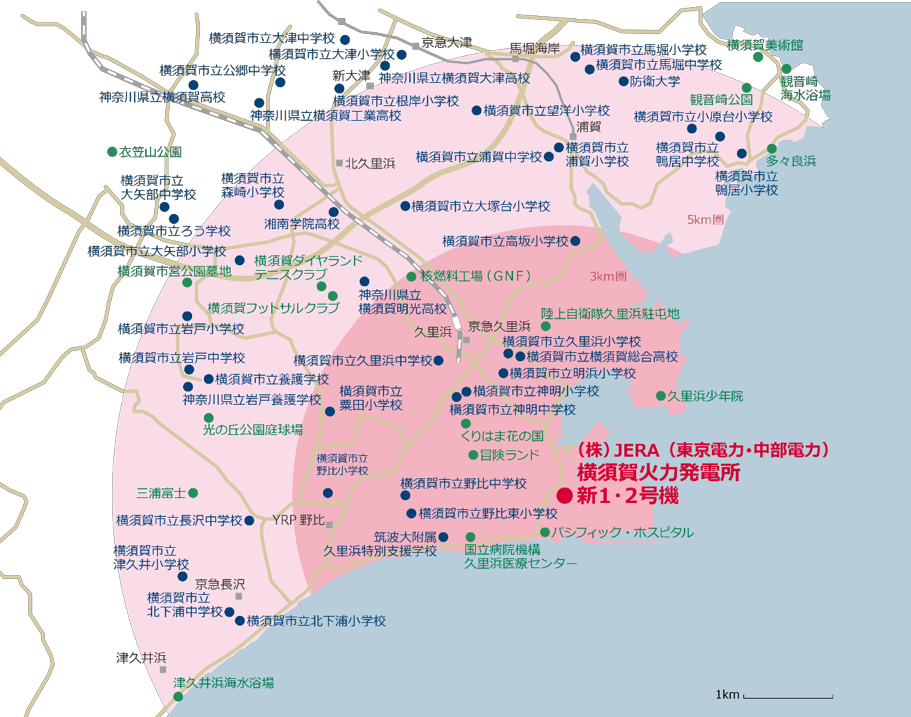