News Letter Vol. 1 Has Been Released!

On November 20th, we released the first volume of the Yokosuka Climate Case News Letter.

Please click on the image below to view the news letter. 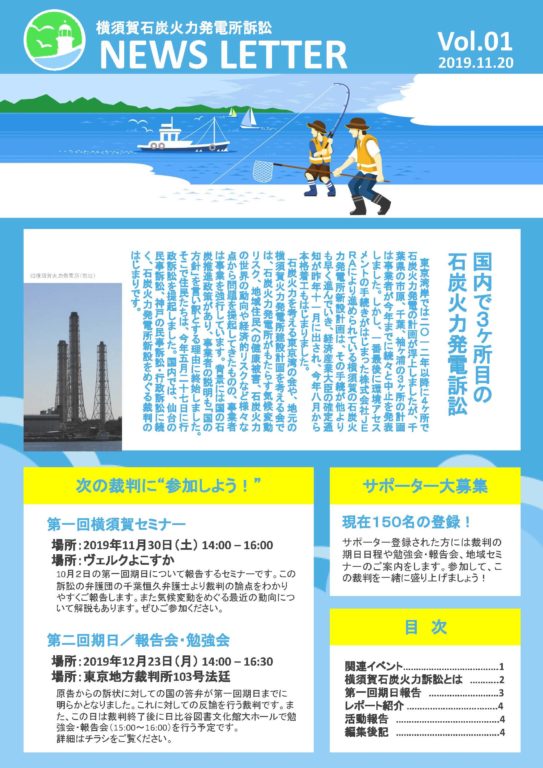 Starting in 2012, plans surfaced for the construction of coal-fired power plants at four locations along Tokyo Bay. But over the years, the companies in charge announced that three of those projects in the cities of Ichihara, Chiba and Sodegaura had been halted. The Yokosuka power plant project pursued by JERA, however, the last to enter the environmental assessment process, passed through the evaluation faster than the other three, receiving confirmation from the Minister of Environment in November 2018. Construction then officially began in August 2019.

Despite the Citizens Group on Coal Power in Tokyo Bay and the Citizens Group on the Yokosuka Coal Power Plant Construction Project pointing out the many risks coal power plants pose to climate change, the health of the people living in the area, the economy etc., JERA continues to push its own business and activities. JERA is backed by the fact that national policies promote coal, and uses this as an excuse for going forward with its project. For this reason, citizens initiated an administrative lawsuit on May 27th, 2019. Following the civil litigation in Sendai and the civil and administrative litigation in Kobe, it marks the start of the trial concerning the constructions of new coal power plants.

What is the Yokosuka Climate Case?

Appealing against the invalidity of the environmental assessment

The Yokosuka Climate Case demands the revocation of the Minister of Economy, Trade and Industry’s decision that did not necessitate an update of the environmental impact assessment report concerning the plan for the construction and operation of the new Yokosuka thermal power plant units 1 and 2 (provisional name).

There are 45 accusers, consisting mainly of people living in the vicinity of the Yokosuka power plant as well as residents of Kanagawa prefecture and Chiba prefecture on the opposite shore of Tokyo Bay. Three of them are minors, the youngest being a 7-year old elementary school student. The plaintiffs are fighting for themselves, but also for their children and grandchildren, to ensure they can have a good, safe life.

The government should not have permitted this project for the reasons described below. This lawsuit is questioning the legality of the government’s procedure.

◆ In order to achieve the 1.5 – 2.0℃ goal, we cannot allow the construction of new coal power plants

To reach the goal to keep global temperature increase below 1.5 to 2℃ as outlined in the Paris Agreement, it is necessary to completely turn away from coal power until 2030. This is why we cannot allow any new coal power plant constructions from now on.

◆ A simplified environmental assessment is wrong

Originally, there were eight power plants — at first burning coal before switching to petroleum and other fuel sources — in operation in the region in question. However, from 2004 onwards, with some exceptions, most were either abolished or put out of operation for the long-term. Some were operating after the nuclear accident in Fukushima, but from 2014, all units were stopped.

However, the old Yokosuka coal fired power plant had already been taken out of operation, meaning it was not emitting any CO2 or other pollutants. As a new plant is going to go into operation there, one cannot say that emissions of CO2 or other pollutants will decrease in comparison (as there are no emissions to begin with). Since this diverges from the requirements of “improved replacement”, the environmental assessment was thus simplified illegally.

◆ The elements examined in the environmental assessment were insufficient

In the environmental assessment, there exist errors regarding the main components of the CO2 reduction measures for the new power plant and their evaluation. Another important problem is that from the very beginning, coal was chosen as the fuel source, while other sources that emit less CO2 and pollutants weren’t considered or examined. The environmental impact assessment of atmospheric pollution and thermal discharge was also insufficient.

A Grand Court Room Filled With Observers, Proving the Interest of the Citizens!

With the UN Climate Summit being held in New York in September 2019 and Yokosuka-born Shinichiro Koizumi becoming Minister of Environment, the issues surrounding coal power and climate change garnered much attention in- and outside of Japan. At the first court date of the Yokosuka climate case on October 2nd, the observer seats of the grand court were overwhelmingly filled by 150 plaintiffs and supporters, and more people who were not able to audit gathered in front of the court in support.

At the trial, head of the plaintiffs Rikuro Suzuki first conveyed his statement of opinion. At the beginning, Suzuki spoke about his nephew, one of the people officially certified as suffering from a pollution-related illness in Tokyo who passed away after many, long years fighting his disease, and then stated that he had sworn to his heart to not allow something like this to happen a second time. The Yokosuka coal-fired power plant project would pollute Yokosuka’s air which had gradually come to be clean once again, and lead to various health conditions like asthma, for instance, he complained. Moreover, he emphasized that against the backdrop of worsening climate change, building for instance a new coal-fired power plant which emits large amounts of CO2 is something unforgivable, demanding it become a trial, “the passing of a historic decision to be considered as a turning point for climate change mitigation in Japan.”

Thirdly, greenhouse gas countermeasures for this coal power plant emitting large amounts of CO2 were not sufficiently studied, and alternative scenarios, for example those in which this project would not have been realized at all, should have been considered as well, but the operators did not do that. The plaintiffs are claiming that the government should have demanded the correction of this aspect, it being especially necessary to ensure that environmental conservation was properly considered.

From the defendant (the government), with regards to this appeal, 1) the confirmation of the environmental assessment report is not an administrative action, not subject to a cancellation litigation, and the filing of the cancellation litigation as a whole is unlawful; and 2) there was no explanation in court concerning the rejection of the 18-page response document submitted by the plaintiffs on the basis of lack of plaintiff competence (rights guaranteed by law).

We have created this homepage specifically about this trial where we upload almost all of the materials and documents concerning this trial, so please have a look. We assume that this is going to be a long battle. We are asking all of you for your support by coming to attend the trial and showing how much this trial matters to you.

In October of 2019, Carbon Tracker, together with the University of Tokyo Institute for Future Initiatives and CDP Japan, published “The Financial Risks and Economic Viability of Coal Power in Japan”. The report points out that Japanese coal-fired power plants could significantly lose economic competitiveness in the future as the cost of renewable energy decreases, and that the stranded asset risk could rise to 710 trillion yen. Also, if the utilization rate of coal-fired power plants is 48% or the price of electricity is below 72 dollars per MWh, the business feasibility of coal-fired power plants would be lost, and in a comparison based on an analysis of the levelized cost of energy, onshore wind power, offshore wind power and commercial-scale solar power have shown to be cheape than coal-fired power in the years of 2025, 2022 and 2023 respectively. Businesses engaging in short-sighted investments in coal power and attempting to advance coal power against the global current of zero coal should perhaps stop and read this report carefully, then reconsider their business from an economic perspective. https://sekitan.jp/info/carbontracker‐report‐2019/

The Citizens Group on the Construction of the Yokosuka Coal-Fired Power Plant is holding a street petition every month demanding JERA to hald the construction of the coal-fired power plant in Yokosuka. At the campaign in front of Kurihama Station on November 12th 2019, 83 signatures asking for the cancellation of construction plan were collected within one hour. Even so, there are still many people who do not know about the plan. Thus, we have to start by taking to the streets and letting as many people as possible know about the coal power related plans. Please contact us if you would be interested in participating in these activities
You can also sign the petition online: http://bit.do/yokosuka‐syomei

After Sendai and Kobe, Yokosuka is the third location to see the initiation of a lawsuit concerning the plan for the construction of a new coal-fired power plant. The Ministry of Economy, Trade and Industry issued a confirmative notification on November 30th 2018, and within half a year after that, the complaint was filed. With things being so busy, the half year since the filing of the complaint flew by in a blink of an eye. Like in the other regions, we decided to publish a newsletter for the Yokosuka case, too, and have finally created the first issue. Please follow the future developments of the trial together with us! (Momoi)