News Letter Vol. 2 Has Been Released!

On December 26th 2019, we released the second volume of the Yokosuka Climate Case News Letter.

Please click on the image below to view it. 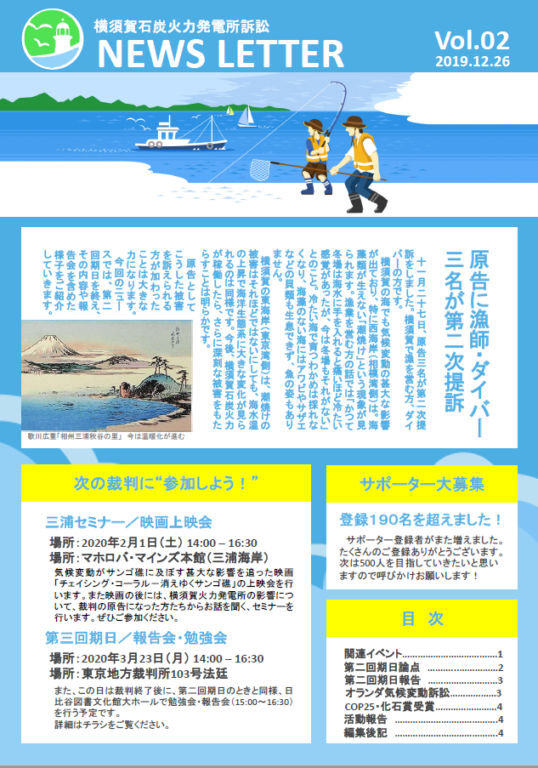 Three Fishermen and Divers Among the Plaintiffs Initiate the Second Lawsuit

On November 27th 2019, three plaintiffs initiated the second lawsuit. They are fishers and divers in Yokosuka. Yokosuka’s sea is heavily impacted by climate change, especially the Western coast (Sagami Bay side), where one can witness a phenomenon called “rocky-shore denudation” where seaweed does not grow.

The individuals running fisheries stated that before, when dipping their hands in the ocean water during winter, it would be almost painfully cold. But nowadays that is not the case anymore. Seaweed traditionally growing in cold waters cannot be harvested anymore, and in seas devoid of such seaweed, shellfish like Awabi and Sazae too, and fish also, cannot survive.

On the eastern shore of Yokosuka (Tokyo Bay side), the damage due to rocky-shore denudation is not as big. Still, big changes to marine ecosystems can be observed as a result of sea temperature rise. There remains no doubt that, were the Yokosuka coal-fired power plant to really start to operate in the future, even more serious damage would arise.

But more people have joined the plaintiffs to appeal and fight against such damages, and have grown into a great mobilizing force. This newsletter will outline the events of the second court date, the topics covered and discussed as well as the informative meetings.

Trial Trends: The Exact Damages Born by the Plaintiffs
Issue Points on the Second Date: Disposability and Plaintiff Eligibility

This case seeks to revoke the government’s issuance of a final confirmation notice on the Environmental Impact Assessment. At the first court date, the defendant’s stated and requested that (1) the final notice shall not be subject to a revocation suit (as it is not disposable), (2) the plaintiffs have no legal rights to call for the cancellation of the notification (no plaintiff eligibility), (3) the appeal should be rejected since it is unlawful. However, the plaintiffs provided proof of “disposability” and “plaintiff eligibility”. Their main arguments will be introduced from here on.

Plaintiff Claim #1 — Concerning the Disposability of the Confirmation Notice — In the complaint, it was stated that the confirmation notice gives “a legal status under which it is possible to submit a construction plan and start construction, based on the Electricity Business Act”, however, the defendant argues that this kind of legal status has no real effect.

To this, the plaintiffs responded as follows.

Second: A finalized evaluation document having received a final confirmation notice is a legal criterion for power plant operation.

Third: There is no other means to fight. For thermal power plant construction, there are no installation or operation permits. There is no effective means for effective legal remedy other than disputing it at the final notice stage.

Plaintiff Claim #2 — Concerning the Eligibility of the Plaintiffs — The defendant is denying the eligibility of the plaintiffs, but their concrete rights and how they were infringed upon were explained at the second court date as outlined below.

(1) Concrete Rights and Their Infringement

First: There is the worsening of global warming and the damage caused by CO2 emissions from the power plant. With global warming advancing, fishing resources and other important means of livelihood may be damaged or lost, and landslides or floods may be caused by more intense rainfall. As a result, lives could be lost, people could be injured, incur grave financial damage like the loss of their home, as well as suffer from health problems due to heat strokes, for example. Significant human rights and benefits, such as life and physical health or important property and important means of livelihood, are seriously violated in irreversible ways.

Third: The hot water drained from the power plant could eradicate fishing resources, and seriously and irreversibly violate the significant benefits of means of livelihood.

Particularly with regards to the rise of sea water temperature due to atmospheric pollutants, thermal discharge etc., those who are directly impacted by the damage caused by this are people living close to the project area as well as fishermen working there, and the extent of the damage likely gradually increase the closer one’s work place or home is to the plant.

(2) Areas Considered in the Assessment Procedure

Of the 48 plaintiffs, 25 are living within 3 km of the proposed power plant site, and 11 are living within 20 km. The area within 20 km is the area used the Electricity Business Act and the Environmental Impact Assessment Act to evaluate air pollution (and the resulting damage). In addition, the Kanagawa Prefecture Environmental Impact Assessment Regulations give special consideration to the area within 3 km from the planned power plant site, and hold public hearings with local residents. This shows that those who live in this area are typically at risk of serious damages to their health, livelihoods and living environments due to air pollution and thermal discharge.

(3) Fisher’s Means of Livelihood and Their Grave Infringement

Global warming can seriously and irreversibly deprive fisheries of important resources essential to their livelihoods. In particular, with changes in temperature of seaweed beds due to increases in water temperature, and with further hikes in water temperature, the kinds of marine species found could change, and rocky-shore denudation could occur. A decline in seaweed means the loss of breeding and feeding grounds for fish and shellfish species, significantly impacting the marine environments. This could lead to fishers losing important aspects of their livelihoods. In the fishing areas along the west coast of Yokosuka, rocky-shore denudation is a wide-spread problem, and could further worsen as a direct result of global warming and the thermal water discharge from the new power plant.

Report: A Seat Lottery among 128 People, and an Entirely Full Court Room

December 23rd, an incredibly beautiful day, in stark contrast to the heavy rain of the day before. At 1:20 pm, a long line of 128 people wishing to observe the Yokosuka coal power lawsuit formed in front of the court. Since there are 98 seats in the grand court, the chances of winning a seat were at 75%. Due to the large number of observers, the trial started about 15 minutes later, and began with legal team representative Nobuo Kojima delivering an oral argument on “plaintiff eligibility”. There was no comment from the defendant (country), and the whole statement ended in about 20 minutes.

After that, a report session and a study meeting took place at the Hibiya Library and Culture Hall. Kiko Network’s International Director Kimiko Hirata, who had recently attended COP25, reported on the latest international trends surrounding coal-fired thermal power. Then, lawyer Akihito Kubota outlined the issue points of the Yokosuka climate case. After that, five lawyers took the stage to answer questions from the participants. During the Q&A session, statements surfaced like “Japan is the worst country worldwide with regards to plaintiff eligibility” or that many horrible court rulings were made at Japanese courts, and all over the room heavy sighs could be heard in response to this. The lawyers sent out the message that action by the citizens was the key.

Documents from the trial and the study meeting are available on this website, so please feel free to take a look.

In 2012, there was a lawsuit in which the Urgenda Foundation, an environmental protection organization in the Netherlands, together with 866 citizens called for a further 25-40% reduction of greenhouse gas emissions compared to 1990 levels, since the 2020 targets set by the Dutch government were insufficient to fight climate change.

In 2015, the Hague District Court (First Instance Court) acknowledged the group’s allegations and ordered the government to raise its reduction targets in line with the group’s allegations. The ruling states that the fact that the Netherlands’ emissions are small compared to other countries does not affect its obligation to take large-scale preventive measures. “There is evidence that even small emissions can contribute to the increase of atmospheric CO2 and dangerous climate change.”

The Government of the Netherlands appealed that it decided to abolish the country’s coal-fired power plants in 2030, but reduced it by only 13% since 2012 after the first instance ruling. However, in the second instance decision of 2018, the court upheld the original decision. The government appealed and the Supreme Court proceeded with a hearing. The final ruling was issued on December 20th, 2019, confirming the victory of the plaintiffs and citizens.

In this case, regarding the topic of plaintiff eligibility, the defendant (government) stated that “there was no eligibility for lawsuits for future generations” to which the court responded that “the people currently living in the Netherlands, especially the younger generation, will undoubtedly be affected by climate change throughout their lifetimes”, disarming the defendant’s claim. It would be great if Japanese courts could also give this kind of consideration and judgement.

COP25: Receiving the “Fossil Award” Twice Due to the Coal Power Problem

At the 25th Conference of the Parties to the United Nations Framework Convention on Climate Change (COP25) held in Madrid, Spain in December 2019, Japan was awarded the dishonourable “Fossil of the Day Award” twice, for being “the country that made the most regressive actions and statements during that day’s negotiations.” The Fossil Award is awarded by the Climate Action Network (CAN), the world’s largest network of climate NGOs uniting 1,300 organizations in 120 countries, during the COP. Japan received its first award on the third day (the second day of meetings), when the Minister of Economy, Trade and Industry Hiroshi Kajiyama made the problematic comment at a press conference after a Cabinet meeting  that “we would like to keep the option of power stations fired by fossil fuels such as coal” in response a new report by the United Nations Environment Programme (UNEP) recommending, among other things, the phase-out of coal-fired power generation in Japan. The second award was received on December 11th, because of Minister of Environment Shinjiro Koizumi’s speech at the COP Ministerial Level Meeting on that day in which he did not show his willingness to strengthen Japan’s climate change countermeasures as required by the international community, specifically with regards to the reduction targets for coal and greenhouse gas emissions. Close to the venue of COP25, protests took place frequently in response to the Japanese government’s advancement and promotion of coal-fired power, clearly highlighting how Japan’s stance is opposite to that of the world.

On December 8th 2019, a symposium celebrating the first anniversary of the Kobe coal litigation titled “What to Do? Responding to the Climate Crisis ー The Problem of Japan and Kobe in a Changing World” was held at the Grand Hall of the Kobe Private Institute. The event was a great success, attracting over a hundred visitors. The agenda covered the state of lawsuits taking all over Japan aiming for “zero coal”, and also encouraged further thought about the next steps in moving away from coal and carbon in the near future as the climate crisis continues to grow more and more severe. The commemorative “Citizens’ Declaration from Sendai, Yokosuka, and Kobe aiming for a sustainable society without coal-fired power plants” was adopted. With regards to the climate case in Yokosuka, plaintiff representative Mr. Rikuro Suzuki and legal team representative Mr. Nobuo Kojima gave presentations.

While COP25 took place, there were daily reports on the situation, and Japan’s attitude toward coal power was criticized. Against this backdrop, the Yokosuka climate case has begun to attract a lot of attention. We want to create more excitement and engagement among all generations. (Momoi)